The idea for this exhibition came about from a leisurely afternoon stroll. It depicts the kind of things observed, such as freshly washed quilts blowing in the breeze, cats lazily watching the world go by, chattering birds in the trees above and scurrying lizards from beneath cool stones.

A Celebration Of Christmas 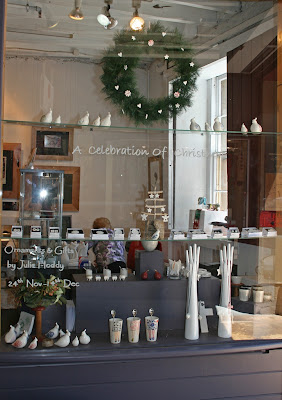 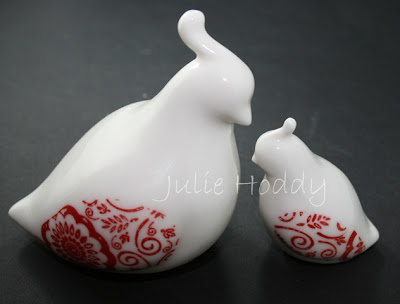 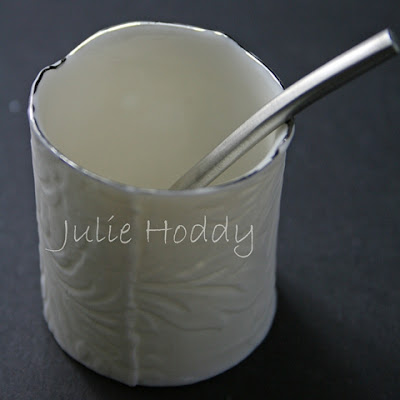 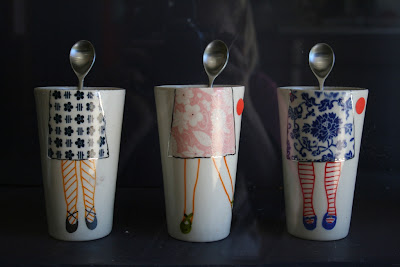 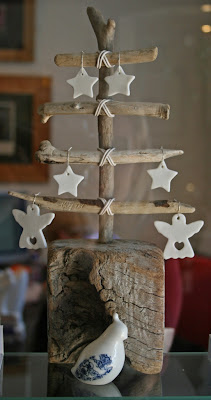 A Celebration Of Christmas
Ornaments & Gorgeous Gifts
Designed & Handcrafted in Tasmania
by Julie Hoddy
24th November - 14th December
Don't miss out
Posted by Off Centre Gallery at 4:27 PM No comments:

Jude Maisch - "In Praise of Pattern"

Jude Maisch - "In Praise of Pattern"

Throughout August Jude Maisch will show her new range of decorative thrown and slabbed ceramics in the Large Window Gallery.

Jude's approach to using tissue transfer decoration is akin to patchwork, with fragments of many images arranged on surfaces in varied ways. Not just one image, but several; with the desire to taste them all, like cakes on a plate.

In Praise of Pattern draws on memories of childhood hand-stitched throw rugs, the many patterned cups and saucers in straining cabinets and the array of special fabrics over chairs and couches. They are memories of the houses of her Grandmother and Auntie, where everything was special, beautiful and precious.
Posted by Off Centre Gallery at 5:58 PM No comments:

Please come and help us

OFF CENTRE at its new downstairs location,

Posted by Off Centre Gallery at 3:12 PM No comments:

The Earth - The Universe 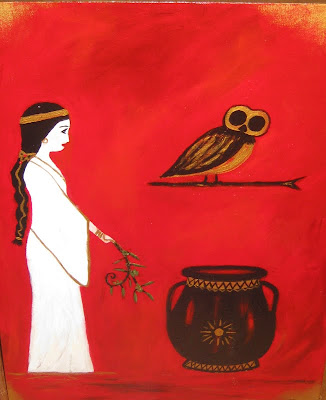 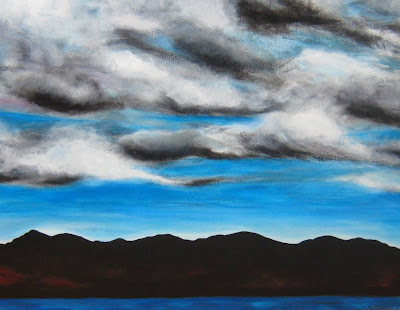 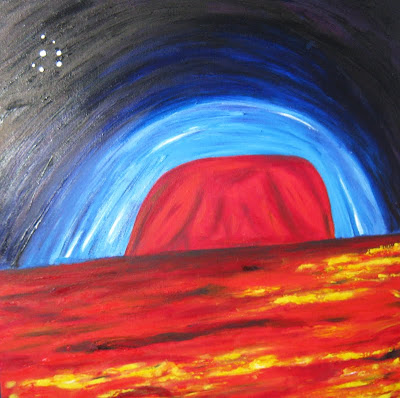 The Earth – The Universe

This exhibition is my first solo exhibition that I am very excited about. The paintings are a colourful, vibrant collection depicting the Earth and Universe from two countries, ancient Greece and ancient Australia.

I am a self taught artist. I began painting about 8 years ago as a form of mediation. My work developed rapidly and reflected a spiritual aspect of my metaphysical life.

I am a first generation Greek Australian, the second daughter of a Greek immigrant father. My Greek heritage and deep love for the Australian land and its beauty and deep ancient connection allows me to travel freely through these paintings. Being a psychic sensitive and empath allows me to connect to the astral plane and that is how I travel around to view each land and then I paint what I see”. I am so very proud of this collection. The paintings speak for themselves. I would also like to acknowledge the unconditional love of my son Liam who helped make these paintings possible.

Posted by Off Centre Gallery at 6:32 PM No comments:

Isabelle Everhart’s slightly tenuous thought experiments to save the world 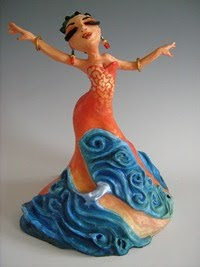 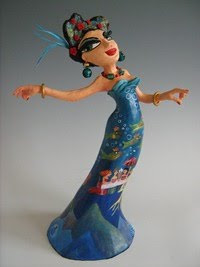 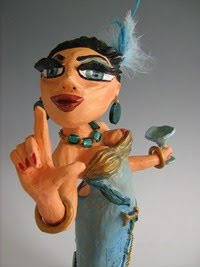 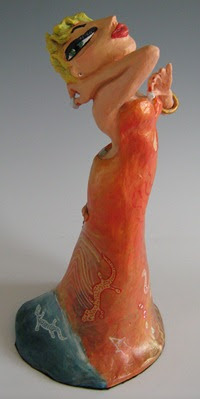 slightly tenuous thought experiments to save the world

Isabelle Everhart wants to make a difference in the world. She wants to help humanity and the planet transcend the myriad of challenges which they face. But she has become unsure about what her appropriate actions might be in a complex landscape and what inadvertent impacts she might cause in her well-meaningfulness.

For Isabelle is stretching into a beyond where her normal ways of making meaning of the world no longer seem to function very well. The dimensions of reality seem to be unfolding in front of her, calling for new ways of relating, being and thinking.

Isabelle finds herself needing to dissolve her scientific certainties and create different thought experiments about herself and her world. Multi-dimensional, tentative and fragile explorations which take into account spiritual and physical dimensions of being, which lay contradictions and world views bare.

She wonders if these excursions into new thinking spaces can help her lighten her path in the world…. or whether they are an excuse for insufficient action.

Isabelle could just sit and think. But she decides, despite the lack of clear cut answers, to take a leap of faith. She decides to experiment on different ways of being in the world. She decides to open her heart to the feedback the world gives her and engage the compass of her soul.

Perhaps in the trail of bubbles she leaves we can glimpse new imaginaries to help us be in the world in new ways. And then perhaps the world will be saved.

Posted by Off Centre Gallery at 12:51 AM No comments:

Miscellany, a mixed media exhibition, explores the local history, wildlife and natural environs of the island.

Traditional watercolour studies by Wendy Wilkinson pay homage to the smaller inhabitants of the island while Trish Hopwoods wildlife compositions bring out the quirky nature of relationships.

Sue Fricker’s passion for local history is reflected in her images of battery point and the Tasman Peninsula.

A more contemporary approach is taken by Bob Hodgman in his exploration of line, form and space within the pictorial plane and Averil Walters in her fluid layering of lines that create a sense of woven material.

Posted by Off Centre Gallery at 11:43 PM No comments:

Here are more examples of the fun and quirky exhibition currently showing at the Off Centre Gallery. 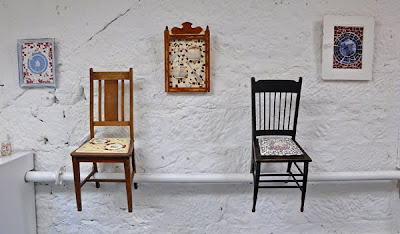 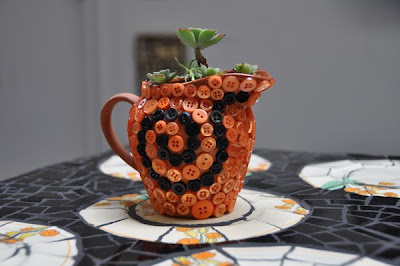 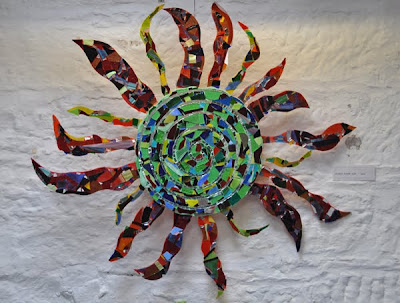 Posted by Off Centre Gallery at 5:36 PM No comments: 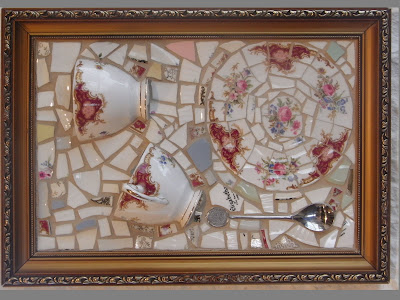 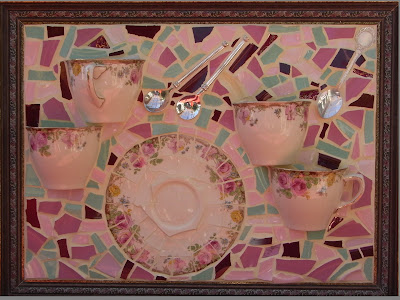 I create quirky mosaics from broken china, including bowls, cups, plates and other found objects like spoons, buttons, vases and old bits of furniture.

I frame the mosaics using old frames and other interesting things, such as old trays and window frames found in tips shops and op shops.

In some of my mosaics I plant succulents in them, which adds a whole new dimension and life to them.

I have mosaiced some chairs and tables and have put many different mosaics in exhibitions such as Art from Trash and the Art Society of Tasmania's gallery.

All of the materials I use are recycled and have been given a new life!

January the 27th - February the 23rd.
Posted by Off Centre Gallery at 3:54 PM No comments: 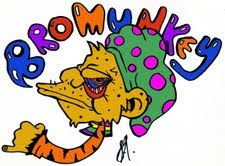 Sean Anderson and Chase Shiel are the creative minds behind the Street Banana Exhibition.

Chase Shiel’s goal growing up was to be an aspiring sports journalist covering and reporting everything to do with football (soccer). His dream was then changed when he began to suffer with Chronic Fatigue for over twelve months in his teenage years.

It was through this illness that he found who he was, what his true passions were and what he wanted to do with his life.

Chase has traveled to other states in Australia to obtain professional training and pursue his dream to become a shoe designer. Chase has attended RMIT in Melbourne, Victoria, for shoe design courses and most recently travelled to Sydney where he trained under Andrew McDonald in professional shoe making and design. In Tasmania Chase has set up his working studio at his home. He works here at his best, designing, customizing and working on his goals for the future.

Chase ultimately wants to travel to Europe to work with major shoe designers to learn the art of shoe design and return to Australia with his own “YOU-nique” style.

Sean is an up and coming 19 year old artist, born and raised on Vancouver Island, Canada; now residing in Tasmania. Sean has been creating art since an early age, starting off by drawing on his math homework then progressing to various other mediums, including canvas, shirts, shoes and skateboards.

Sean’s art displays a quirky style, usually showcasing an “off centre” sense of humour and a unique take on modern culture. Sean is a speed drawer and his favourite art medium is Sharpie to blank paper. He is inspired by Russ Morland, another artist from Vancouver Island and Dillon Froelich, an artist from South Florida.

Sean has also ventured into the area of shoe design and has co-created the ‘moon boot’ design which is a derivative of the Nike AF1.

Sean is always drawing, or thinking about drawing and is really excited to finally display his artwork in a gallery. This is Sean’s first gallery space. Sean is a second year University student currently studying a BFA/BA degree. It is his dream to one day to design as a career.

Posted by Off Centre Gallery at 12:08 PM No comments: